Most of our Reptiles and Amphibians can be found in the beautiful displays inside our Rainforest Diner. They have been individually designed by Andy Ferguson, owner of L.A. Reptiles in Lincoln, as a donation to our charity. He has done such an amazing job at designing and hand-installing them; adding specialist props and features for each individual species needs. Come along and view these incredible creations and the reptiles & Amphibians living within them.

If you or someone you know is not too keen on reptiles then don’t worry, we have ample seating both inside and outside The Rainforest Diner away from the displays. 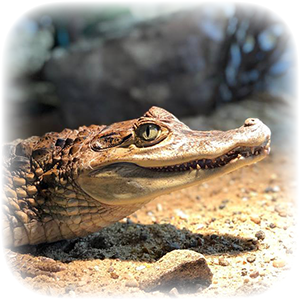 We have a male Caiman at the park and he loves his enclosure which mimics his natural landscape with pond, sand and a lovely warm environment. They are part of the Crocodilia family but are actually known as a separate species to Crocodiles. They are predators, like alligators and crocodiles, with the majority of their diet consisting of fish as well as small birds, reptiles, mammals and insects. Due to their ferocious nature, they do not have many natural predators and human killing of this species is not as high as that of Crocodiles. Caiman skin is much tougher and stiffer, so is less desirable for trade purposes. Our Caiman lives in a specially adapted enclosure next door to our Kookaburra. They have a large, deep pool to immerse themselves in and plenty of natural foliage to mimic their wild habitat. He is a very relaxed, docile Caiman, so will often lay and bask under the lamp or sit underneath the waterfall for a massage! 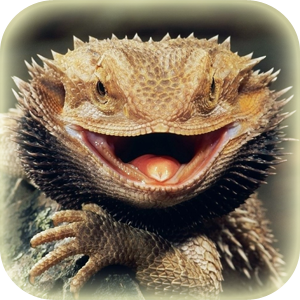 Set inside our Rainforest Diner is a unique reptile and amphibian display to educate and capture the attention of our reptile loving visitors. If you don’t love reptiles, there is alternative seating away from our display so we allow you to make the choice of observing these creatures in their vivariums or enjoying your dining experience away from them. The Bearded dragons are favourite among visitors because of their characteristics and colour changing abilities. Their signature ‘Beard’ will change to black to assert dominance and their bodies vary in colour to adapt to heat or mood changes. They are very interesting to watch as they move around their vivarium or bask under the warm lamps, they often display different hand waving gestures and head bobbing as they square up to you… probably jealous of your food! 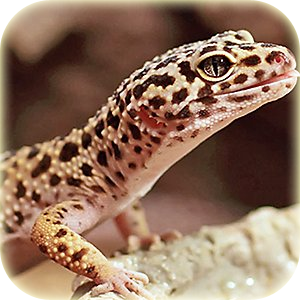 Quite a new addition to our display are our Leopard Geckos and true to their name, they have leopard markings which are vibrant and very attractive; but can also be very varied in captivity. They have some very unique features, one of which being that they have movable eyelids! They are unable to climb up smooth surfaces so are mostly ground-dwelling lizards, living in the rocky grasslands of South-Asian Afghanistan, Pakistan & North-West India. The Leopard Gecko is quite large in comparison to some other species and mainly eat insects such as crickets, roaches and meal worms. You can find them and lots more information about them inside The Rainforest Diner when you next visit! 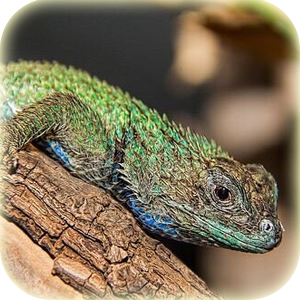 Also known as the Green Spiny Lizard, the Emerald Swift has bright green and blue markings and males are usually more brightly coloured than females. They are native to Central America and spend most of their day basking in the sunshine, if the temperature becomes too hot or when they need sleep, they will retreat to a burrow or under rocks to cool off and rest. The Emerald Swift has only recently become a species of it’s own, it used to be classed as a sub-species to the Mexican Emerald Spiny Lizard.

You can find our Iguana about halfway on your journey around the park, near the Tapir and Kookaburra enclosures.

They are interesting reptiles and not often seen as pets, but are becoming more popular due to their bright colouring. They can reach between 4 – 6 feet in length, and half of this is usually their tail, which they use to hit predators… including humans if they feel threatened! They have great eye sight and can see colours, shapes, shadows and movement at long distance. This helps them to navigate their way through the thick forests in the wild, to be able to seek out their food. They are herbivores, and so usually eat fruits and vegetation such as dark leafy greens. 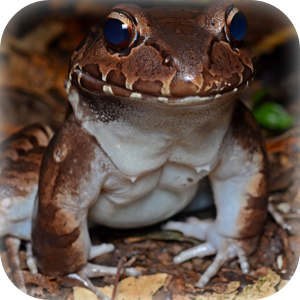 This is one of the newest additions to our reptile display within The Rainforest Diner. The Smoky Jungle Frog is a heavy, robust frog that many will mistake as a toad because of his appearance. They are nocturnal, so are more active in the evening but he most definitely noticeable within his enclosure. It has been custom made to mimic his natural surroundings in the sub-tropical and tropical forests, swamps, rivers & marshes of South America. They have smooth skin and their bodies are a reddish brown colour with broad red/brown marks. They like to burrow so will often be seen under plants or fallen plant leaves & under rocks… see if you can spot him hiding! 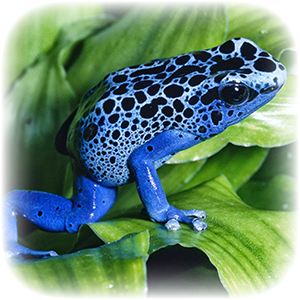 At Lincolnshire Wildlife Park we have two different species of Dendrobates (dart Frogs); they are Tinctorius (Giant Orange) & also Azureus (Blue). They are very interesting creatures with different pattern types and no frog has the same pattern. There are many different colour variations of Dendrobates, which is the collective name for this species. All variations are toxic if consumed and can cause pain, cramping and stiffness. Their bright colours act as a defence mechanism to warn animals looking to consume them. They are usually harmless for humans to handle, but if handled roughly then the toxin can be secreted causing the same problems as when they are consumed. 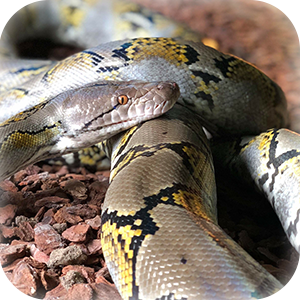 At the park we just have the one snake and it is a Yellow Anaconda, which you can view in our Rainforest Diner vivariums. It’s only a young snake so is quite small, but adults can grow to lengths of around 4 metres, and females are usually larger than males. They come from South America and are one of the largest snake species in the world, although the Green Anaconda is larger. They are non-venomous and kill their prey by constricting (squeezing) them, like other Boa and Python species.  Although snakes are widely seen as scary, they are actually quite docile when handled correctly. We often help raise awareness about reptile species, such as snakes, by offering handling experience on National Reptile Awareness Day on 21st October each year. 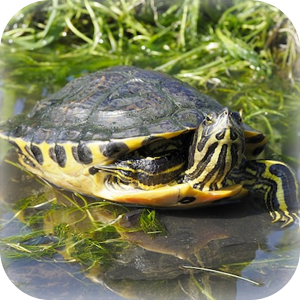 The National Turtle Sanctuary launched in 2020, to assist with rehoming turtles across the UK that could no longer be given the space they need, or that have been abandoned in our waterways. Turtles that have been abandoned are causing lots of damage to our natural ecosystem, but owners find themselves without a choice, as most other sanctuaries will not accept this invasive species. There are several sites across the park, for our now over 200 turtles! You can find their Acclimatisation pools near the Walk Through experience, as well as a natural pool inside the aviary. A fantastic new development is also being constructed on our Nature Reserve, to be able to help lots more species to have a longterm home at our sanctuary.

We have a variety of Turtles at the sanctuary, including Yellow Bellied Sliders (pictured), Red Eared Sliders, Cumberland Sliders and Map turtles. If you have a turtle for rehoming, then please contact turtle@lincswildlife.com 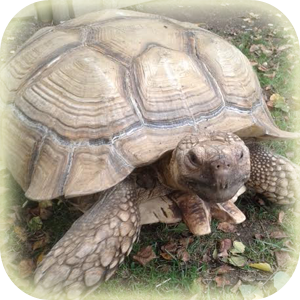 Our tortoises are of all shapes and sizes ranging from our smallest of just a few inches, to Albert our largest Tortoise, weighing in at 5 stone! Sulcata Tortoises are the third largest species in the world and the largest of the mainland species, they are quite interesting to watch with their prehistoric characteristics. Surprisingly, they can move quite quickly in warm climates but will slow down to almost a halt in cold weather which can be quite dangerous if left exposed for too long. So if you visit in the winter months when it is particularly cold, please be patient with them as they may chose to stay in their house where there is heat lighting, to avoid a potentially fatal exposure outside.

In 2021 we also had some hatchlings! You can view them in a lovely heated vivarium inside The Rainforest Diner, while they grow a little bigger and stronger to eventually be released outside with the others. 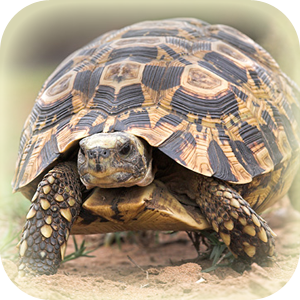 Our little Hinge-back Tortoise is displayed with our other Reptiles, instead of being with our larger Sulcata Tortoises outside; this is because he is so small and needs plenty of heated lighting. His vivarium mimics the dry woodlands of Africa where he originates from and he loves to bask under the light. He is quite different to other tortoises, in the way he looks and his diet; he needs at least 40% mushrooms in his diet, providing him with vital Vitamin D. His shell is a very similar colour to that of other Tortoise species, but the back juts down at a 90 degree angle to cover his back end. This is to help protect him from predators that attack from behind… a vital defence mechanism for such a slow mover!