Lincolnshire Wildlife Park is open throughout the year. Opening hours are subject to change without notice. Severe inclement weather may affect our opening hours.
10am - 5pm
(March - October)
10am - 4:30pm
(November - February) 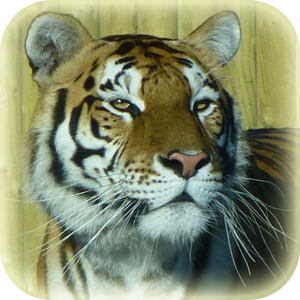 The beginning of our Bengal adventure started with Dehra (photo to the left) and her three cubs Baseera, Sajhiba & Lajuka who arrived at Lincolnshire Wildlife Park in January 2015 in need of a new home. Even with this being one of the biggest commitments for Steve to make, he took on the task and housed them in our new Animal Holding Enclosure, while raising funds to be able to build their amazing new enclosure “Bengal Gardens“. We now have an amazing 8 Bengal Tigers in total; our original 4 plus a male named Skah and three more females named Soutanna, Kumari & Bella. Come and see their amazing new enclosure and get an amazingly close experience at one of the most advanced research facilities in the U.K.

Tigers are fascinating creatures and no Tiger has the same stripes as the next, the special white markings on the back of their ears act as ‘eyes in the back of their head’ to warn off other challengers and give the impression that they are always watching! Find out more amazing facts about the Bengal Tigers when visiting their enclosure. 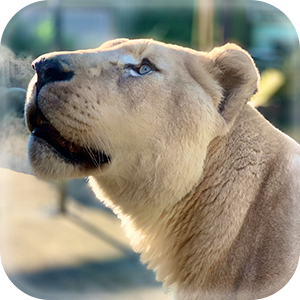 At Lincolnshire Wildlife park we have been lucky enough to give a home to two male White Lions named Pascha & Uganda. They arrived in November to settle in and were unveiled by Children in Need’s Pudsey Bear himself on 15th November 2019. These truly majestic brothers are gentle giants and have had a great time exploring their temporary enclosure, the Animal Holding Enclosure, where they will remain until their new custom built enclosure is completed in 2022. Although the Lion species as a whole is only listed as being Vulnerable by IUCN, the White Lion has much more worrying figures attached. With trophy hunting still rife in South Africa, there were only 11 White Lions recorded in the wild in 2018. Until such a time as trophy hunting becomes illegal in their country of origin, they face the terrifying threat of being wiped from the planet completely! It is only with the help of protected reserves and wildlife sanctuaries, that this species are able to still be seen today. We feel absolutely overwhelmed that we are able to offer them a haven, and show these beautiful creatures to our visitors. 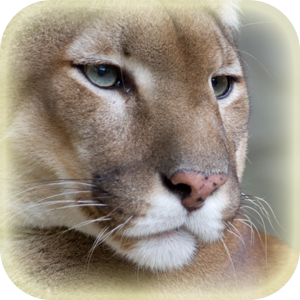 Unfortunately due to Nigel’s Exotropia, the charity have had to make the very difficult decision to take him off-show until his new enclosure can be completed. After having a couple of near misses with the pool inside A.H.E, due to his diminishing eyesight, it is no longer safe for him to be in there. He is still at the park and being looked after very well by his keeper until work can be resumed on his sensory enclosure. You can help us do this! Just visit his JustGiving page to find out how. Pumas originate from America, and were spotted at such widespread areas that they got given many different names by local tribes & explorers; known as a cougar, mountain lion, Florida panther or Catamount. In-fact, there are actually over 80 different names for these cats & unlike most other species they do not live in packs, they prefer a solitary lifestyle. 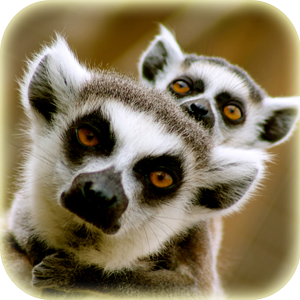 Clarence & Kola were the first Ring-tailed Lemurs to arrive at the park in 2009 as a pair, and every year since they have provided us with gorgeous Lemur pups, often being born in front of our visitors! This gentle species are one of the focuses of our animal experience packages as they are such a pleasure to interact with and are such a gentle and close family unit. Watch them leap from branch to branch with such ease and read about their interesting habitat on the remote island of Madagascar. Lemurs are highly social primates which are often seen living in groups of 17 and above, they are female dominant which means the males do not really get a look in until the females say so! Although you’ll see them swinging from branches, they are often ground-dwellers seen foraging for food. They are extremely vocal, using different calls to alert danger & using scent to mark dominance.

Don’t miss our daily Ring Tailed Lemur talk at 11:00am! 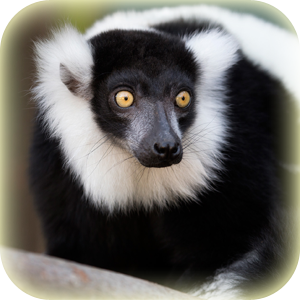 We have 3 Black & White Ruffed Lemurs at the park, which arrived back in October 2016. So they are still fairly new residents but are used to living together and are very gentle lemurs, despite their larger size in comparison to our Ring-Tailed & Common Brown Lemurs. They are classified as Critically Endangered on the IUCN Red List, so there are not many left in the wild and are indigenous only to the African Island of Madagascar. Together with the Red Ruffed Lemur, they are the largest species amongst Lemurs and spend most of their time high up in the forest canopy. They can live up to 36 years of age in captivity and although they are gentle, because of their size and wild nature they cannot be a part of our popular Lemur Feeding experiences. They live next door to our Ring-Tailed Lemurs at the park. 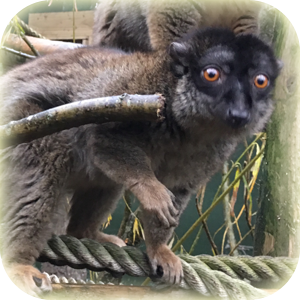 The Common Brown Lemurs at the park arrived at the same time as our Black & White Ruffed Lemurs, and have a newly refurbished enclosure at the start of your journey around the park! There are 4 Lemurs and they are much smaller and stranger looking than our other two species. They belong to the Island of Madagascar but can also be found on the Island called Mayotte; although they are thought to have been taken there by man originally. They have short dense fur which is usually brown in colour with bright red/orange eyes. They are quite unique in the fact that their diet can be quite varied; they usually eat fruits, leaves and flowers but will also eat small insects and bark, sap and even soil! They have a much higher tolerance to toxic compounds found in plants than other species. They are generally more active during the day, but have also been monitored as having high levels of activity at night, especially during the dry season and during a full moon! 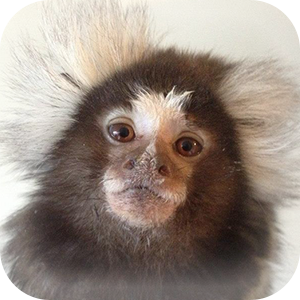 We have recently adopted 2 Marmoset Monkeys from Drayton Manor Park to live out the rest of their lives with us at Lincolnshire Wildlife Park. They are great little monkeys and are living together in their enclosure next to our Ring-Tailed Lemurs. They are only very small monkeys, measuring an average of 20cm and are native to South America. They are one of 22 species of New World Monkey; including species such as the Buffy-Headed, Black-Headed, Emilia’s and the Gold & White Marmosets. They are highly active and live in the upper canopy of forest trees, feeding on insects, fruits and leaves. They live in groups of around 15 and most members will play a role in caring for any off-spring, taking it in turns to carry them around on their backs and bellies! 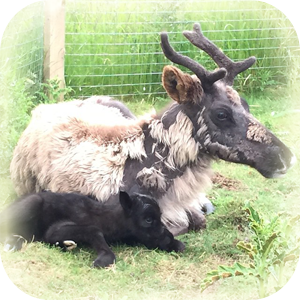 Just next door to our Greater Rhea you will find our reindeer, Mother Lexi & Son Boomer. These interesting creatures are very timid and wary of people at first, until they get to know you. They have taken a particular liking to Steve, Lincolnshire Wildlife Park’s CEO… following him all around the enclosure when he visits and occasionally sneaking up on him when he’s not looking to see what he’s up to! Reindeer are mainly from arctic tundras, and have some very interesting qualities. Their hoof pads soften and widen in warmer weather to walk with ease on the soft ground, in colder weather their pads shrink exposing their sharp hoofs which are able to dig into the ice for extra grip. Their antlers are like a human’s fingerprints, no Reindeer’s antlers are the same! 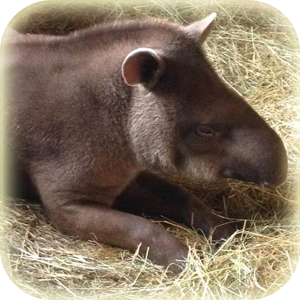 Our Lowland Tapir is named Cecil and contrary to his species, he is very gentle and friendly. Tapir originate in the wet Brazilian and South American rain-forests and are very agile and great swimmers and divers; despite their ‘heavy’ physique! Tapir are related to the rhinoceros and have special splayed toes to help them walk through soft muddy grounds, such as those near the waters edge.  A group of Tapir in the wild is called a candle and baby Tapir are called calves. Calves have very different markings to adults, they are striped with white bands which helps to camouflage them in the wild. A visit to Lincolnshire Wildlife Park means you will be able to see just how lovely Cecil is when he comes over to greet you, see his amazing features & watch him cool off and bathe in his pool.

One of the most popular animals in most park’s are Meerkats, they are very interesting and humorous to watch while they dig & play. Their enclosure at our Park is designed with play in mind for these little creatures…visit Meerkat Wild Western Town. Witness our Meerkats stumbling out of Cleo’s Tequila Bar or digging in the cowboy’s graveyard, you’ll also see them enjoy an afternoon siesta in the barn! You can buy Meal Worms from reception to feed to these furry little relatives of the Mongoose; they’ll run up to you for that special close-up photo. Not only is their enclosure interesting but it is designed with all in mind, with low viewing points for children and wheelchair users. In the wild one of the most important jobs is that of the sentry, who is the ‘look-out’ of the gang. They find a high point to look out over the African plains & alert the others of any danger from predators.

Did you know you can feed our Meerkats?

Buy your treats for just £1.50 from our Animal Snax kiosk within the park on your next visit! 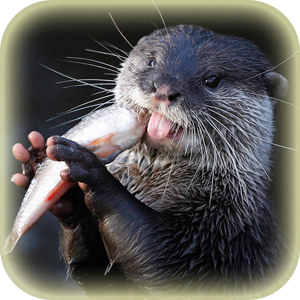 At Lincolnshire Wildlife Park we have a group of Asian Small-clawed Otters, also known as Malaysian or Oriental small-clawed or Asian clawless Otters. They are extremely cute but extremely shy and love to swim in the natural pool and hide in the reeds. With rocks to play with and grasses to roll around in, the enclosure is a haven for this species. The Otters recently had pups at the park, which are still getting used to their new environment, see if you can spot them on your next visit! Otters have very aquatic features, including long streamlined bodies, webbed paws & small round ears which close when under water. Their fur is very dense for warmth, meaning these mammals are extremely versatile in most weathers… although ours do love their cosy nest boxes packed out with straw. The animal keepers usually feed them near the viewing points of the enclosure so watch out for them impatiently waiting for their fishy treats!